Every potato grower would wish for this: a beautiful crop and a good yield and the desired potato quality at harvest. He also wants to meet all environmental standards. At the start of the growing season, we should consider what will happen in the soil in the coming period. 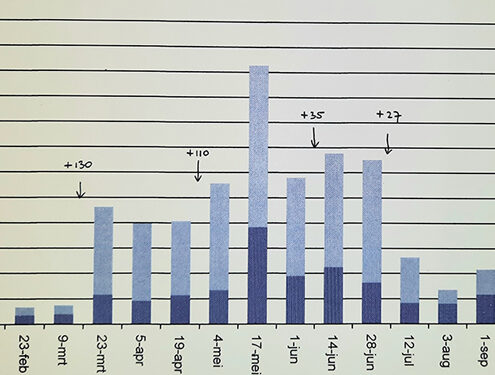 Nitrogen availability fluctuates through the season.

To learn more about this, we followed the course of the nitrogen contents on a number of plots for several years. We did this on several plots and at two depths, namely 0-30 and 30-60 cm deep. An important conclusion we drew was that a nitrogen peak was visible on 17 May on all plots. That peak was not caused by a fertilizer application, but by the weather conditions. It is temperature and moisture that stimulate mineralization.

Nitrogen levels in the soil fluctuate strongly. The potato grower wants the nitrogen to benefit the crop. And that the nitrogen is preferably absorbed as much as possible and converted into kilograms of potatoes. Nitrogen that denitrifies or leaches is lost. 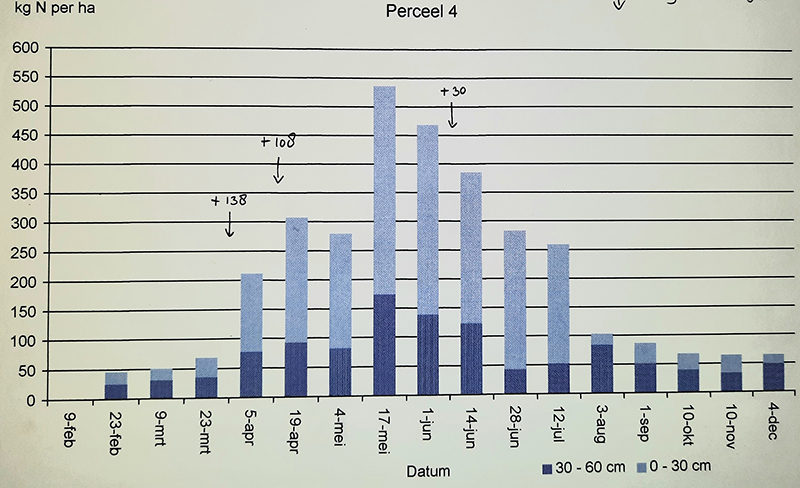 The peak in nitrogen availability depends on temperature and moisture.

The CEC is the soil’s ability to hold these minerals. Those minerals are slightly bound to the negatively charged clay particles and organic matter particles. It is the positive ions such as potassium, magnesium, calcium and ammonium that remain available to the plants. Plants make use of this and absorb those nutrients. Unfortunately, this does not apply to nitrate, because it is negatively charged and will be able to wash out unhindered if it is not directly absorbed by the plants.

We will follow how plants absorb the nitrogen with the leaf stem study. Next week we will start in a lot of Innovators. It is then 28 days after the emergence date. A good time for the first measurements.

In the coming months, arable farmers Joke and Leen de Geus will monitor the development in nitrogen availability using the leaf stem method. Joke is a soil and fertilization expert and works for the Groen Agro Control laboratory in Delfgauw. She follows and describes the developments on the Innovators plot for TopBodem.